The printing industry has left us a rich heritage of peculiar phrases which are still in use even though the original printing technology is no longer used.   I have picked out several phrases to illustrate this which you will all be familiar with.

We refer to capital letters as uppercase and the rest of the letters as lowercase. has a selection of old print machinery and drawers full of all the letters of the alphabet made out of wood and metal.  Each drawer would be made up of  wooden trays divided into sections to hold all the letters of a particular typeface.  These letters were used to make up the words for the story that was being printed.

‘A dab hand’ is also believed to be an old printing term for the mushroom shaped tool called a dab that the ink was applied to. The dab would then be repeatedly worked onto the letters until all of them were covered in ink in readiness for printing.  If there was an even coverage of ink the person who applied the ink was thus a dab hand.

Mind your Ps and Qs

This was advice given to printers’ apprentices to avoid confusing the backward-facing metal type lowercase Ps and Qs, all the letters for print were placed onto a composing stick the wrong way round so that when you drop the stick and all its letters face down onto the galley the letters will then be the right way around.  It was therefore extremely easy to confuse the lowercase ‘p’ with ‘q’.

Wrong end of the stick 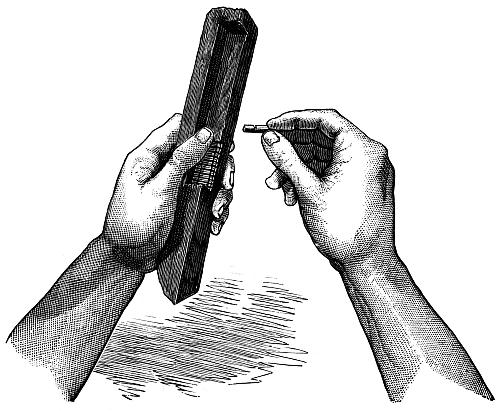 There seems to be a couple of different derivations for this phrase but this one in particular comes from the print industry.  Typesetters were picking out the letters from their cases of large and small letters to make up words.  He would stack them together in a composing stick with all the letters face down, these letters would then be dropped onto the galley the right way round.  A beginner or someone not paying full attention to the task in hand could easily hold the composing stick at the wrong end resulting in the text being quite meaningless.  Hence the phrase ‘getting the wrong end of the stick’.

The English language is so rich and steeped in our history, both cultural and industrial.  The wooden and metal letters are now becoming very collectable with the cases that held the letters being used as decorative shelves.

Printing the written word effectively and clearly is still just as important today as it ever has been.  It is interesting though, that these phrases have become part of our daily language and are very much in use today.

How to make your print marketing stand out from the crowd

Your print marketing has to stand out You need to differentiate yourself from the competition and show yourself to be the best option. If your…

Print is often seen as an expensive marketing channel. That does appear true if one compares the cost of sending out a printed item against…

A great booklet, by the ladies of Knott End Golf Club. It is full of recipes, poems, and much more to raise money… https://t.co/rvDKvcfJkb 3:33 PM - Nov 27

RT @PrintingPlusUK: We will be open for business throughout this second lockdown and will continue to serve our customers in line with the… 8:39 PM - Nov 17

We will be open for business throughout this second lockdown and will continue to serve our customers in line with… https://t.co/7q51C2KfWD 3:28 PM - Nov 5

As we are all moving into the ‘new normal’ there are so many aspects of making our workplaces covid-secure. The us… https://t.co/fXhK4ZPU7p 3:02 PM - Oct 20