Something for British exporters to chew over

Just a mile down the road from our house is the local Lidl supermarket. If you take a slightly different route you’ll find an Aldi, again about a mile away. In the few minutes it takes to drive to either of these ubiquitous German grocery and household goods stores you’ll spot (at the very least) several Audis, BMWs and Mercedes, and you may well be sitting behind the wheel of a VW yourself.

Later on in the evening you might then go out for a pint in a pub or restaurant where you order a Pils, produced in a German brewery. And as our thoughts are turned towards Christmas pleasures and consumption, where better to go and have a cup of mulled wine than – you’ve guessed it – a German Christmas Market?

Why have the Germans notched up one commercial success after another – and I’m not even going to mention sporting success on the football pitch …?

Behind all these things (and traditions like the Weihnachtsmarkt) is a simple idea to get the basics right; the shape, the feel, the performance, the price. Das Preis-Leistungs-Verhältnis. A real mouthful, bigger than a Bratwurst mit Currysauce at a market stall. The relationship of price to performance.

And when they make things, they’re made to last. Long term planning and production alone lead to long term survival and profitability. It really is a different way of thinking from our own ‘get rich quick’ and ‘be an overnight success’ mythology, isn’t it? A different Weltanschauuung, as our German neighbours might say in fact – another linguistic Bratwurst to chew on, meaning a process of looking at and thinking about the world.

And when the mass of ordinary Germans look at the world of things as shown in advertisements they expect to see clearly what they’re purchasing and to be convinced that the price is right. No nonsense ads, plenty of factual information, resulting in rational decision-making.

Over the past 11 years of helping local companies in England sell to the Germans, we’re always trying to get our clients to think about these ideas and much more before entering Europe’s biggest market. Exporting British ideas the German way – and there are thousands of Great British ideas around – could well be a winning combination and healthy for profits in the long term too. 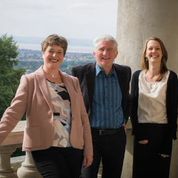 Eureko Associates is based in the North of England and specialises in export services for Germany and the wider European market. It was founded over 10 years ago by Vivien Hacker and she and her associates provide hands-on help to SMEs wanting to export products or services to Europe’s biggest market.

How to make your print marketing stand out from the crowd

Your print marketing has to stand out You need to differentiate yourself from the competition and show yourself to be the best option. If your…

Print is often seen as an expensive marketing channel. That does appear true if one compares the cost of sending out a printed item against…

A great booklet, by the ladies of Knott End Golf Club. It is full of recipes, poems, and much more to raise money… https://t.co/rvDKvcfJkb 3:33 PM - Nov 27

RT @PrintingPlusUK: We will be open for business throughout this second lockdown and will continue to serve our customers in line with the… 8:39 PM - Nov 17

We will be open for business throughout this second lockdown and will continue to serve our customers in line with… https://t.co/7q51C2KfWD 3:28 PM - Nov 5

As we are all moving into the ‘new normal’ there are so many aspects of making our workplaces covid-secure. The us… https://t.co/fXhK4ZPU7p 3:02 PM - Oct 20